'Global Britain' is the Government's vision for the UK's post-Brexit identity: one which, in particular, will seek to further integrate itself into global markets and "attract inward investment to support jobs and growth".1

For those looking to sell to the UK government from abroad, this is a resounding vote of confidence; for domestic suppliers, the prospect of greater overseas competition arises.

Tussell's report on Overseas Suppliers in the UK Public Sector demonstrated that non-UK suppliers' presence in public procurement has remained strong - if not grown - over the past few years. In light of its findings and the realisation of 'Global Britain', where might opportunities for non-UK companies looking to sell to the government lie?

Understanding these opportunities and success stories is pivotal not only for non-UK companies hoping to enter the UK public sector, but also for domestic suppliers to understand where competition lies. 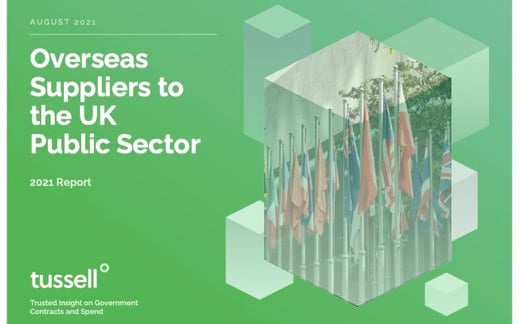 Where have Overseas companies found success in the UK public sector?

Overseas companies have consistently managed to secure contracts - large and small - across the public sector. In 2020 alone, the public sector spent £18 billion with overseas suppliers, representing 13% of total spend. Though the proportion of spend on overseas suppliers has gradually declined since 2017 (at 15%), total spend volume has increased by 27% (from £14bn).

Though overseas success can be seen across the public landscape, three specific sectors have proved consistently fruitful: IT, Consulting and Construction. Overseas companies have managed to win valuable and influential public sector contracts in these areas, both at the central and local levels.

Below, we've broken down a sector-by-sector analysis of overseas companies' presence in these sectors, including:

A company is designated as 'overseas' if it or its parent company is registered outside the UK.

* Based on the location of main headquarters

The quantity - both in number and value - of contracts awarded to overseas suppliers across these three sectors is testament to both central and local government's willingness to look abroad to provide vital public sector services and projects.

The question then becomes whether this willingness is to be sustained into the future.

There is little sign of this relationship declining: business with overseas suppliers has only increased in recent years across these sectors. From 2017 - 2020, total overseas spend by sector increased from £13.4bn to £16.1bn in Construction, £6.8bn to £8.5bn in IT, and £2.1bn to £2.6bn in Consulting. 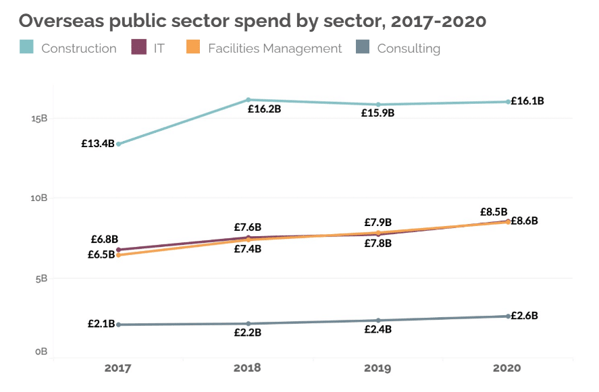 Despite Brexit, little will likely change vis-a-vis procurement access for overseas bidders in the foreseeable future. Being a member of the World Trade Organisation's Government Procurement Agreement (GPA) means other GPA party nations will continue to be able to bid for certain procurement opportunities in the UK,2 while under the UK-EU Trade and Cooperation Agreement EU bidders will also continue to have the right to bid on UK procurement tenders.

Though withdrawing from EU procurement regulations will undoubtedly let the government shift towards the domestic market - such as permitting local authorities to reserve smaller contracts for domestic suppliers under PPN 11/20 - the procurement playing field remains very much open to overseas players.

After all, the government has clearly signalled receptivity to seeing more overseas involvement in the UK public sector. The recently established Office of Investment is but one example, seeking to encourage overseas investment in "significant" areas.3

Where might these "significant" areas for overseas suppliers lie?

In 2021 the government announced one of the world's most ambitious climate change targets, aiming to reduce the UK's emissions by 78% by 2035.4

Central and local authorities will need all the assistance they can get to achieve this goal: turning to the services and skills of overseas suppliers will undoubtedly be a part of this.

Data from Tussell clearly demonstrates the growing urgency from public buyers to go greener. Towards the end of 2020, the public sector had awarded £198 million in Net Zero related contracts, representing a 148% increase in value from 2015. Over this period, local government buyers were actually the biggest Net Zero spenders, representing over 50% of the total market value.

Both the quantity and value of Net Zero-related contracts are only set to increase as the 2035 target draws nearer. Ahead of the expected publication of the government's Net Zero Strategy paper, the government has made clear its goal of ensuring all sectors of the UK economy orient towards decarbonisation. Overseas suppliers can play an important role in ensuring this is done.

One such sector is infrastructure.

Tussell's data shows that transport-related infrastructure awards alone - after experiencing a dip in 2019 - are rising year-on-year; overseas suppliers can seize on the government's mounting determination to boost connectivity.

Overseas companies that fail to remain informed by the government's shift away from a value-for-money-centric approach to procurement - both within and outside infrastructure specifically - will be unlikely to be received warmly by public sector buyers going forward.

Such considerations also play into the telecoms sector.

Demand for telecoms infrastructure and services is only set to increase over the coming decade as data usage rises. Data from Tussell clearly demonstrates a year-on-year increase in the publication of telecoms related contract awards, with the total award value of telecoms contracts in 2021 already surpassing prior year totals.

Though controversy has arisen concerning an over-dependence on non-UK companies in the country's digital infrastructure - notably, Chinese firm's Huawei in the UK's 5G network - the growing demand for data and speed will have to be met from somewhere: overseas suppliers could be up to the task.

The report further commended the National Security and Investment Bill's aim of increasing oversight over foreign investment in the UK's defence sector. This will be done through the Department for Business, Energy and Industrial Strategy's new Investment Security Unit, which will "assess and respond to national security risks arising from foreign direct investment".6

Tussell's flagship report on overseas suppliers has made clear the significant - and growing - relationship the UK public sector has with foreign companies.

Despite calls for authorities to 'Buy British', the government appears determined to steer clear of the UK turning inwards after Brexit. The public sector will remain looking outwards for investment opportunities, with several sectors looking promising for overseas suppliers hoping to make an entry into the UK public sector.

Whatever the future may hold, all overseas and domestic suppliers - current and prospective - can turn to the Tussell platform to receive notice of all new public sector tenders, and scan ahead for soon-to-expire contracts.

6 HM Government, 'New and improved National Security and Investment Act set to be up and running'