Last year, we published a report looking at the potential impact of the government's new procurement policy that could exclude suppliers with poor payment practices from bidding on public sector contracts. One year on, we look at the positive impact the policy has had, but also find there is still much room for improvement. Enter your details below to download the full report, or read on for the highlights.

In September 2019, the government introduced a procurement policy that meant suppliers with poor payment practices risked exclusion from bidding on public contracts worth £5m or more per annum ('in-scope contracts'). Companies have since had to prove they pay at least 95% of their invoices within 60 days or less to comply, or if they don't, provide an action plan that sets out how this will be rectified.

This report takes a closer look at the impact of the policy and asks: Has it been a success?

Although we chose to avoid naming suppliers in the previous iteration of the report, this time we provide the names of the top earning suppliers with the worst late-payment performance.

Enter your details below to get the full report sent straight to your inbox. 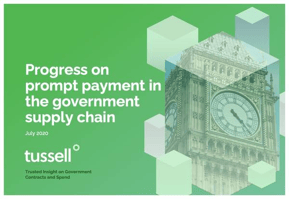